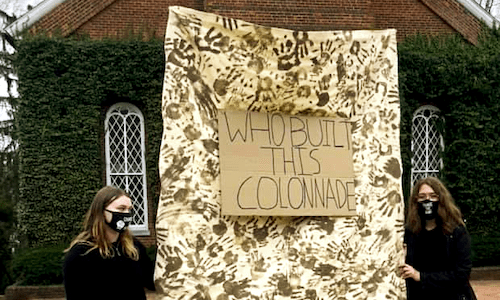 There was a time when ancestor worship was almost obligatory in the South.

This opens new new opinion piece in the New York Times by Margaret Renkl. We all recognize that sentiment and realize that for many that time has not passed but that time is still now.

The whole piece is about the truth and why it is so important.

Many of my fellow white Southerners are deeply, dangerously wrong about matters of history that by now should be abundantly, self-evidently clear.

We can substitute words as we like given what we are focusing on here: just swap “white Southerners” for “white alumni” and suddenly it becomes very topical, as the Board of Trustees and those opposed to change at the University have made crystal clear this summer. Because they are predominantly white, and mostly male as well.

This essay is a damning indictment of ignoring the truth in this time when Critical Race Theory is the newest bogeyman for the rump remnant of white supremacists, all concentrated seemingly in a single political party, on which to focus their ire. The University, by reclaiming that stain by retaining the name, falls directly into the the camp of those that deny the truth of our collective past.

It is, as we’ve pointed out countless times a focus on the past, not the future, or for that matter, the present. They’ve shown themselves to not only to be unmindful of the future, they are instead mindful of a mythical past that never really existed. A past where white Southerners did nothing but act honorable despite all the evidence to contrary.

The essay closes with this:

Because in the end, the greatest honor we can pay our ancestors isn’t flowers left beside a headstone or monuments erected in a public square. It’s communities that are stronger — kinder, more inclusive and more resilient — than the ones our forebears left us..

It is with this spirit that we fight for change. For a kinder, more inclusive community in Lexington without all the Lost Cause bagged that makes it by its very nature exclusive, and ultimately doomed to fail in its stated goals.